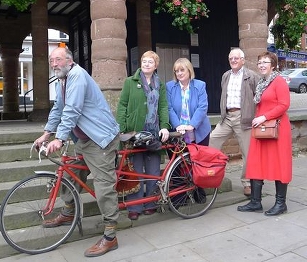 Councillor Chris Bartrum served as mayor of Ross-on-Wye during 2013-14 and he nominated the Basement Youth Trust as his charity.

The BYT is a local Ross-based charity that provides free services for young people, including drop-in sessions with youth workers, football and skate park sports.
Chris's fundraising included a sponsored tandem ride around Herefordshire, during which time he called on all the other mayors in the county. He was supported by his Mayoress, partner and fellow town councillor Jane Roberts. The Mayor's Dance and other activities also added to the final sum raised of nearly £6000.
The BYT have been thrilled by this donation which will make a huge difference to a small local charity and help to protect their services for young people in Ross.