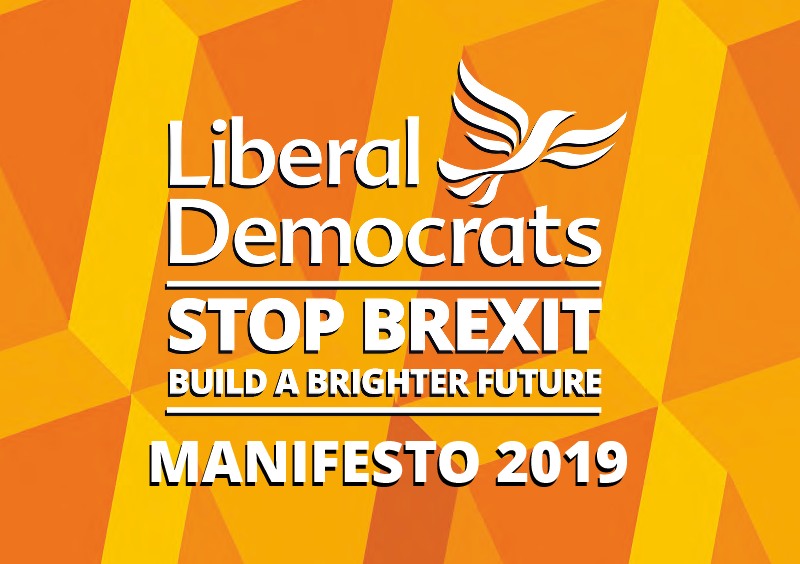 You can read the full manifesto by visiting libdems.org.uk/plan

For more than three and a half years, our country’s future has been on pause as the Brexit debate has raged on. This election gives us the opportunity to transform our country and create a brighter future. The Liberal Democrats have an ambitious vision for who we can be – a society where every child and young person is nurtured to become whoever they want to be, where if you play your part in society, you can live a happy and fulfilling life, and where we do everything in our power to save our planet for future generations.

And the opportunity for the Liberal Democrats at this election is huge. There are no limits to my ambition for our party as we take our positive vision for a brighter future to the country.

In the last few months, tens of thousands of people have joined our party as our membership continues to hit new records. We’ve had our best-ever local elections and beat both Labour and Conservatives in a national election for the first time in a hundred years, returning 16 Liberal Democrat MEPs. And former Labour and Conservative MPs have joined us because they know that we want to build an open, fair and inclusive society. The Liberal Democrats are standing strong, growing every day, and I am so proud to be the Liberal Democrat candidate for Prime Minister at this election.

Voters are being told that the only choice is between the Conservatives and Labour. But when I look at Boris Johnson and Jeremy Corbyn, I know that I could do a better job as Prime Minister than either of them. Our country deserves better than what is on offer from the two tired old parties, each led by men who want to reuse ideas from the past – whether the 1870s or the 1970s – and gamble with our children’s futures.

For too many people, things aren’t working as they should be. They are working hard and playing fair, and yet they struggle to pay the rent, or put food on the table and they don’t feel confident that their children will go on to have better opportunities than they had. That’s not good enough.

And instead of focusing on how we create a brighter future for everyone, our politics has been utterly dominated by Brexit. Leaving the European Union is not the answer to the single parent who is struggling to make ends meet, to the child who needs extra support at school, or to saving our planet. In fact, it will only make those problems worse.

Our politics is in a state of flux, and this general election could lead to seismic change out of which a new and different politics can emerge. A politics based on hope, not fear. A politics where every individual and community can thrive, and where we work together to save our planet for future generations.

For me, the choice is clear. To stop Brexit and build that brighter future, vote Liberal Democrat. We have the plan that this country deserves, and we are ready to deliver it.

You can read the full manifesto by visiting libdems.org.uk/plan