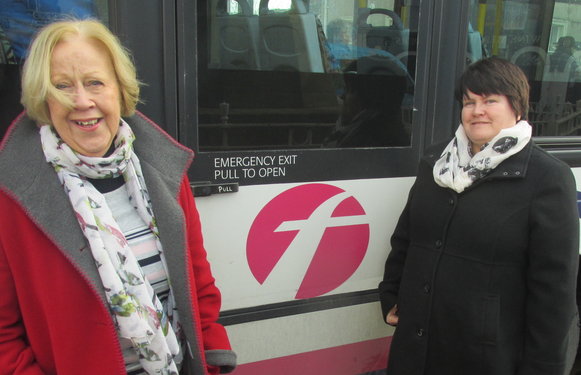 Since last summer, Hereford Liberal Democrats and Age UK have been working with residents suffering from the loss of local bus services as part of Council cutbacks.

Photo: Cllr Polly Andrews and Lucy Hurds celebrate the news of a First bus service for the Stephens Close Area

However, a replacement bus for the Stephens Close area of Whitecross was blocked by the votes of “It’s Our County” Councillors Sue Boulter, Liz Chave and Independent Cllr Chris Chappell with a casting vote from Chairman of the committee Independent Cllr Phil Edwards.

Local Lib Dems organised a petition and have continued to campaign for a bus service for the Stephens Close area. Now, these actions have achieved success.

From February 23rd, First buses will extend the 437 route into the area for two buses per day, Monday to Friday. Lucy Hurds said “I am delighted that all the hard work and pressure from local people, led by Pat Gilbert, have made this happen. This will be a vital lifeline for many in the area. First buses have asked us to highlight that this is a trial and residents need to support the service if they want it to remain.”